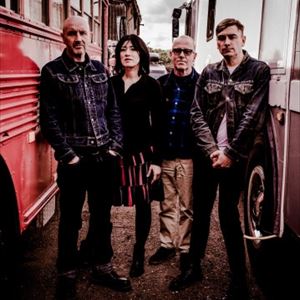 The four band members are former Lush vocalist/guitarist (and former redhead) Miki Berenyi, former Moose guitarist KJ “Moose” McKillop, Modern English bassist Mick Conroy and former Elastica drummer Justin Welch. The connections between them are a veritably tangled family tree. Before they lived together and raised a family, Miki and Moose were notable figures on the so-called shoegaze scene, while Elastica were Britpop peers. After post-punk pioneers Modern English split for a second time, Mick became a latterday member of Moose, while Justin joined the reformed Lush in 2015. And when Lush required a bassist for what proved to be their final show (in Manchester) in November 2016, Mick stepped in.

It was the rehearsals for that Manchester show that laid the foundations for Piroshka. “We sounded great!” says Justin. “Like a proper punk band. Mick brings a huge amount of enthusiasm and livens up the room, and I thought, this is the kind of band I want to be in again.” Mick agreed. “I’d seen Lush so many times, it was like playing with old friends. Miki agreed it was good fun too. And with Moose available, we thought, let’s all have a bash, see what happens.”