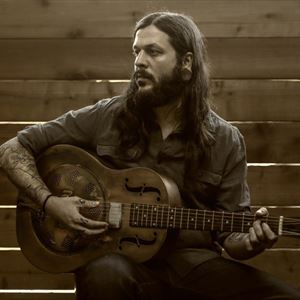 Shawn James at The Boileroom

Pointing to “authentic” performers like Tom Waits (“He has an impeccable ‘no bullshit’ compass”), soul singers like Otis Redding, Sam Cooke or Bill Withers, and the old blues icons who inspired him, James explains, “They weren’t precious about what they did; they didn’t put themselves on a pedestal. I want my music to be respected, but I’ll still sit down at the bar to
have a beer with you. My goal is to make music that stands the test of time.”

James is a road dog, the hellhounds at his heels, performing more than 200 dates a year. His songs have been featured on HBO, CBS and Sony Playstation’s The Last of Us 2. His track, “Through the Valley,” topped Spotify’s Global Viral Charts, while generating more than 60 million streams combined on Spotify, Apple Music and YouTube.

The singer-songwriter has previously released four full-length albums, including his debut, Shadows, a live record (Live at the Heartbreak House), a covers EP (The Madrid Sessions) and the original songs of his most recent effort, On the Shoulders of Giants. Hew newest offering, The Dark & The Light, was released on indie label Parts + Labor Records and produced and recorded by Jimmy Messer (AWOLNation, Kelly Clarkson, Kygo, The White Buffalo).