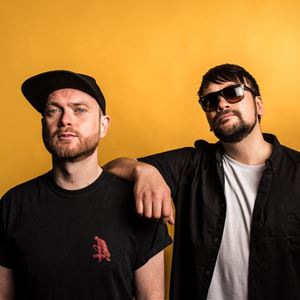 The Allergies at The Boileroom

The Allergies (full band show)
Plus support from Mashashuma

The duo of DJ Moneyshot and Rackabeat have been delighting dance-floors and lighting up the radio airwaves since forming The Allergies and releasing their debut album in 2016.

Year in, year out, they’ve sharpened their skills on the turntables and in the studio, dropping one dynamite record after another.

Clocking up A List status and Album of The Day gongs at BBC 6 Music, as well as sound tracking international ad campaigns, the pair show no sign of stopping the fun.

They’re about to cut the ribbon on their fifth album, Promised Land. Another showcase for their feel-good funk, soul sampling savvy, and party-starting hip-hop.

As usual, the Bristol-based beatmakers have assembled a crack team to help bring their loops to life. LA rap legend, Andy Cooper (Ugly Duckling) is back on board, alongside the mighty pipes of Marietta Smith (House Gospel Choir) – Both staples of The Allergies live show act.

Plus, guest spots from some super special MCs from both sides of The Pond, and quite possibly the most explosive sample-heavy tracks of their career, so far.

Over the last year they found some light amongst the darkness, seeking out solace and release by making beautiful music, dug from old record stacks. And they can’t wait to get back on the road, letting everyone back into their world, once more.

The pair first bonded over this love of funky beats after meeting on the festival circuit. Moneyshot had already made a name for himself as a resident on Ninja Tune’s Solid Steel radio. Gaining worldwide fame for his DJ mixes, with Rolling Stone magazine ranking him in their ’25 Greatest Internet DJ Mixes of All Time’ feature.

Mixing this keen ear for a sample, and some polished studio knowhow, provided the perfect formula for The Allergies sound. Inspired by producers like Cut Chemist, Public Enemy’s Bomb Squad, and the kaleidoscopic sampledelica of acts like The Avalanches and vintage De La Soul, they raid the past to make music for the future.

Tracks like ‘God Walked Down’, which is racking up millions of plays on Spotify, and internationally playlisted hits like ‘Felony’, and ‘I’m On It’, are prime examples of The Allergies vision – To take dusty grooves from forgotten wax and pull out soulful hooks, add hip-hop energy and driving drums, to make something new and exciting that hits your heart, as much as it does your dancing feet.

“The Allergies music is big, bouncy and fat! Just how I like my funk” – Craig Charles, BBC Radio 6 Music